"I'm Proud Of Being From Here!" Angelica Garcia On The Duality Of The Latinx-American Experience

Angelica Garcia is at home, and by ‘home’ we mean her childhood home. The 25-year-old is cooped up in Los Angeles with her mother, her mother’s partner and two younger sisters. She has been there for the past month for her (now cancelled, thanks to COVID-19) residency at The Paramount in Boyle Heights. The Cuban restaurant where she serves has closed down and she would rather be with family than by herself in her apartment. Better to stay on the West Coast than travel back to Virginia, where she currently lives.

“I’m at the point now where I’m like ‘I’m really tired of watching movies!” she laughs in mock isolation exasperation. “I did take a music theory lesson yesterday on Skype though, so that was good!”

Whilst quarantine has its downsides within its obvious necessity, the unprecedented halt on proceedings has allowed Garcia to pause and have a moment in the company of her not-always-nearest, but most certainly dearest. Family is, and has always been, important to her and is entrenched in the writing of her new album 'Cha Cha Palace'.

A colourful smorgasbord of playful yet introspective pieces, 'Cha Cha Palace' is a natural amalgamation of Garcia’s own heritage and dual existence as a second generation immigrant growing up in America. “[It’s] a fusion of my home at the moment. It has a little nod to Richmond, and it’s also a nod to Los Angeles.”

The album was named after a Richmond nightclub that an older friend once reminisced over. “It had been closed down for a long time, but I just loved the name of it. It reminded me of an old Latinx club name like ‘Los Globos’. I was almost imagining a nightclub or something and when I go through it in my head, it’s like each song is a different room. It just made sense to me.”

However, the eclectic sound of 'Cha Cha Palace' was met somewhat quizzically by acquaintances. “I just got little comments from random people at clubs,” she shares. “My first album was more digestible in a place like Virginia and then, as I was working on the songs of my second album, it was like ‘Oh, you should play more like the other stuff’. I just had to stick to it in order to really see it through, but I think it totally paid off.” 'Cha Cha Palace' was written between 2016 and 2020, a whole hot minute in comparison to her debut, 'Medicine For Birds'. It was an opportunity for Garcia - who was dropped by her former label Warner following her first album - to learn what she was capable of, and how many opinions she should listen to. “My confidence went down a little bit, so I knew that was making a lot of people think that my time was up, but I also knew that I couldn’t accept that and used those feelings to hold myself to a higher standard.”

She admits that a lot of the pressure she felt in the interim came from herself and the need to push to achieve her best, whether it be production, performance or in her lyrics. Similarly to the playful beats and the buoyant, invigorated vocal often found in her music, Garcia’s lyrics also pay poignant homage to her heritage - whether it be the food of her culture in the Barack Obama-approved Jícama’ or the smarting recollection of youthful experiences.

“I don’t know that I was angry when I wrote [‘It Don’t Hinder Me’], but I was definitely annoyed, frustrated and just tired,” she states of the 2019 single, which recounts high school memories and the constant nagging feeling of feeling “othered” by her peers, many of whom were from privileged backgrounds.

“[For a while] I was embarrassed of the fact that I was living at my grandmother’s house, going to school there, because there were all these super-fashionable kids and they’re all bragging about how little they had to eat that day. I was embarrassed because my lunch was a quesadilla or a burrito or whatever, and of course I was curvier than a lot of the girls. I felt like everything in my culture and the way that we did things at my house with my family was wrong, or ‘not cool’.

“I feel like I had a lot of shame, even though I shouldn’t have and it really affected me,” Garcia recalls of her teens. “I was bulimic in high school and then finally, when I got into my 20s, it was like ‘Uh, fuck all that shit’ and I started to see things for how they were and it made me [want] to speak against it. That’s why ‘It Don’t Hinder Me’ is so like, I’m proud of being from here”.

All anthemic, wailing indie rock and full throated vocals, Garcia defiantly states her pride in her backyard and quips the cultural intersection of her teens with ‘If you stop eating tortillas, maybe you’d lose weight / “Ava Maria Prisima” ‘cause I went on a date.’ She was very aware of the power of visibility and validation when writing the album.

“I have two younger sisters and I see similar insecurities manifest in them too. I feel like it’s my job to tell them ‘you’re beautiful, you don’t need to lose weight, you don’t have to dress like that’. I think they’re starting to [listen].”

Garcia was keen for her sisters to appear in the video for ‘Guadalupe’, a bright and unapologetic piece directed by her newfound collaborator, Brockhampton’s Spencer Ford. “[The 16-year-old sister] was like ‘I look terrible!’ and I just showed her the footage and was like ‘You look frigging beautiful! Can’t you see it? You look really cool and you don’t look like anyone else!” 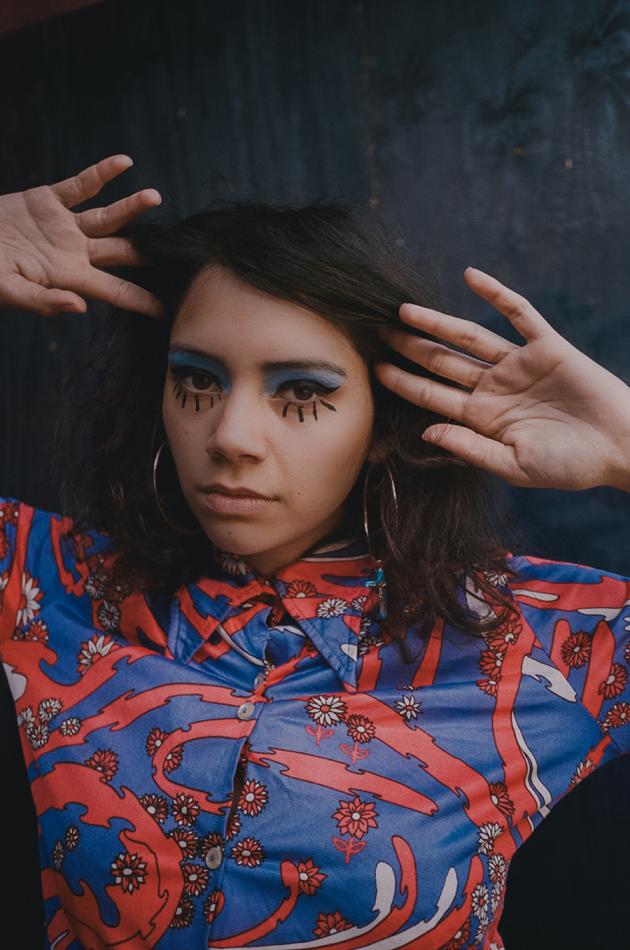 It has only been more recently that Garcia has felt comfortable embracing her own femininity, but it was something she wished to embrace fully in the ‘Guadalupe’ video. “For the longest time I felt like I had to act like a tomboy to be taken seriously, because the second you put makeup and heels on, people think you’re dumb, and that would piss me off to no end. I felt I had to lean away from my femininity, and so ‘Guadelupe’ is taking that ownership back.

“[It] is a different kind of power,” she continues. “And I think for a long time I was afraid of my femininity because I was afraid that it would put me in a certain role or box.” The titular Le Virgen de Guadalupe is held in high regard in the Latinx community - and with Garcia - who remembers being struck that the young deity (religious scripture suggests she was only 14) was the only woman icon in her grandmother’s household.

“Assessing that at an older age, it’s funny because there were sometimes men who were rude or disrespectful to the women around them, but they would pray to the Virgen and hold her as ‘OK, she’s the mother of Christ’. There may not have been powerful women in any other aspect, but for some reason the Virgen was powerful.”

The irony of this is not lost on Garcia. “I just think of myself as a 14 year old girl and there’s no way that I would have been respected, not the same. But then, I think that’s the whole point of the story, that she was deemed this super-powerful figure in spite of her size and her age and her appearance. I think that in itself is an important message, especially in an ancient society where it was so dominated by men.

“So ‘Guadalupe’ is a tribute to the power of all women,” Garcia concludes. “We all have a stem of power similar to hers; power and greatness can come from anyone”.

'Cha Cha Palace' is out now.