Johnny Flynn is a man of many talents.

Alongside his wide-ranging musical endeavours, he's also developed a celebrated acting career, including roles as disparate as a cad in the BBC's recent take on Les Miserables to a central role in breakout comedy Lovesick.

His new role, however, brings together his deep and abiding love of music with a daunting cinematic task - bringing the early life of David Bowie to the silver screen.

Stardust - directed by Gabriel Range and written by Christopher Bell - aims to pin-point the moment when Bowie went supernova, re-visiting his shaky start and peeling back the layers to capture the icon's humanity.

Out now on streaming, Stardust is an ambitious independent feature, one that up-ends expectations in order to reveal a different side to the David Bowie story.

Clash spoke to the actor and songwriter to find out more.

Has Bowie’s music played a big role in your life?

I mean, it is impossible to escape his orbit. I grew up loving Bowie. But you get Bowie fans and you get… Bowie fans! And he was a figure amongst many who I loved listening to. I wasn’t this absolute devotee – I had other people that I gave my heart to in a big way – but I love him, and I listen to him all the time. My nine year old and I get records out on vinyl, put them on, and go deep into Bowie. It’s fun to listen to.

Does that knowledge help or hinder you, from an acting perspective? Do you have to put personal attachment to one side, almost?

A little bit, yeah. This is a David that – hopefully – we don’t know. You’ll be learning stuff about him. And I had to go on a journey of learning new stuff. So it quickly became a person that I really didn’t know at all as I searched it - things that I didn’t know about him at all, in terms of his brother. A lot of this wasn’t out there so much – he would talk about Terry and what an influence he was later on, but not in those early years. It was incredible.

You think of him as this forever-very-successful god of pop culture, and learning that he saw himself as a failure at one point was interesting. Before Ziggy, things weren’t commercially successful. He was always experimenting and doing different things but he had a string of flop singles and it was amazing to think of ‘Space Oddity’ being this outlier in a run of singles that… well, a lot of them are just weird! It’s like, what are you doing?

‘Laughing Gnome’ and all these. I find them interesting now, sitting in the canon of everything he’s done are these songs in that voice. Points of interest! But it’s fun to go to a time when that’s all that he is. He hasn’t worked out this great innovation. I feel like the story is him learning to look in a different direction to deliver his message. 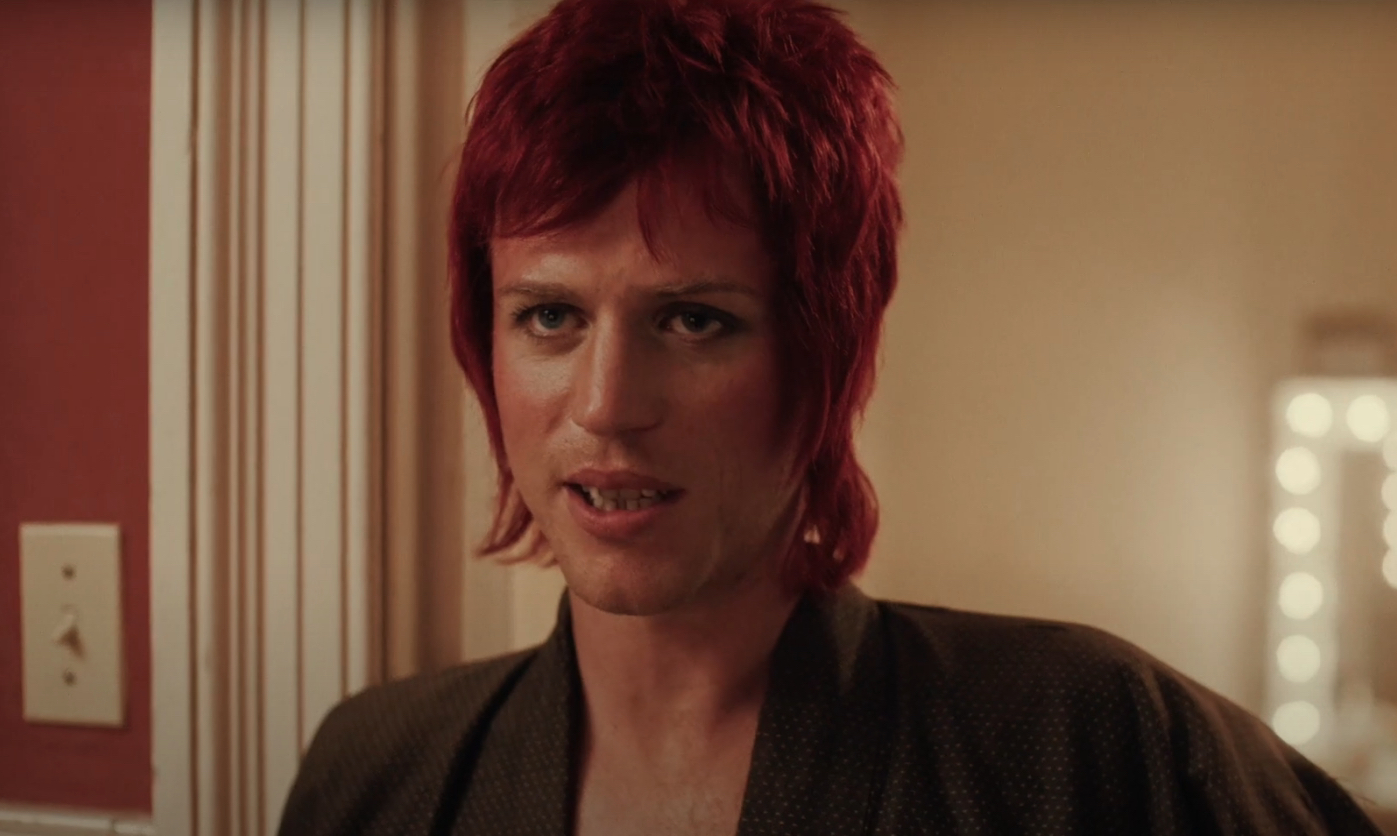 He’s become such a marbled figure since his death – is part of this project about restoring Bowie’s humanity?

Yeah. Absolutely. It is. We’re restoring the humanity – that was really how I saw it. There’s a book by Rilke, Letters To A Young Poet, and it’s about him writing to this young writer… and in that book Rilke sees himself in the young person, and he’s pouring his investment back into a younger version of himself.

And it was interesting for me – having been through the music biz washing machine! My first album came out on Mercury Records, I’d done all the goofy stuff that you have to do… turning up with the wrong visas.

To be somebody as iconic and beloved as Bowie… obviously everybody has their own Bowie in their minds and in their hearts, for me it was going back to this young artist who is very fragile, and who hasn’t found their way yet, and to tell that story with care was an interesting thing to do.

And you even lost a lot of weight to play the role, don’t you?

Yeah! A couple of stone.

A mere couple of stone! How did you go about it?

The way my body is, I was never going to look exactly like Bowie. But I had to do a bit of a crash diet – various fasts. I read some books! I was filming up until we started doing Stardust so I had to have enough energy to be filming everyday. So it was difficult, as I was preparing for this while working on something else. Ideally, you’d take six months to prepare for it, but it’s such a small film that there wasn’t that novelty.

But that kind of stuff was good – I like physical things, because they help to prepare your mind as well. Making sacrifices or spending time studying interviews with him… that stuff is always great for character work.

You came out of one role and went straight into another!

I was filming Emma right up until we started this. For quite a time during Emma I was doing prep on this. I was off on location filming Emma, so I spent the evenings reading various biographies of David and doing voice work. 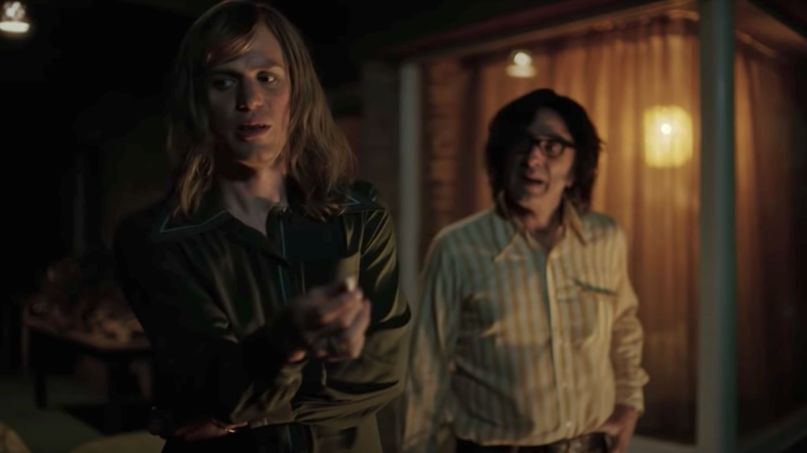 Is it tough to remove yourself from one character and insert yourself into another?

I mean, I quite like doing different things at the same time just because of the way my brain is. I think it’s quite hard. It’s not ideal in terms of acting – sometimes it’s just the way it has to go – but you don’t often have control over the way that dates will land.

In the film world things do move around a lot, and invariably producers will try to make things fit seamlessly. It will literally be a case of finishing one project one day, and starting a new one the next. It’s part of the job.

Did you have any tricks to get into that Bowie mindset before a take?

I would listen to the music. I listened to a couple of interviews on repeat that took place during this period. There’s one from the tour that he’s on. And it’s nice, because he’s pretty fragile. I don’t think he gets particularly confident way until the 70s – if you watch him in the mid 70s then, without making assumptions, he might not be completely sober, as it were. But he’s quite fragile in the early 70s, and I listened to that.

There’s a brilliant BBC film that came out just before we started shooting that I found really useful because there’s a lot of footage that I hadn’t seen before. It’s called Finding Fame and it had interviews with people talking about him during that period, and stuff about his childhood home.

I’d been in New York, I went around the David Bowie Is… exhibition, and that was also very helpful. But yeah, listening to him all the time!

Were there any scenes that you found particularly challenging?

As with any job, there are bits that are hard for one reason or another. We were making this film on a very small budget – it’s a highly ambitious film for the budget. Gabriel and I were so ambitious in the story that we wanted to tell… and I think that’s how good films are made – you try to do more than you’re allowed to with what you’re given.

Often we’d be shooting a scene and because of the North American union rules they’d say they were going to pull the plug on the lights, and then you’d only get one or two takes on a scene. Sometimes that was really hard to deal with, in terms of the limits of budget and time. That was the biggest thing to deal with. It was amazing.

We had an 80 year old cinematographer who had actually filmed David back in the day – he worked with a lot of musicians in the late 60s and early 70s – and he was incredible, because he could make the digital camera we were using work like an old film camera. I think because he’d grown up filming things in that style, it was an important choice for Gabriel in terms of making it look like the 70s.

We had an amazing costume designer, people who could make it look and feel right considering our limitations. It was a film more than anything that I just loved while doing it!

Has making this given you a greater understanding of Bowie? Or do you think he’ll always be somewhat out of reach?

I mean I learned tonnes about him that stayed with me. I read three or four biographies and spent months staring at pictures to try and figure out where he was at in his head at this point. It’s made me appreciate the records loads more – when I listen to ‘Hunky Dory’ or ‘The Man Who Sold The World’.

Studying something will also breed compassion, and thinking about him as a human being and not as a pin up figure was really great. I’m a bigger Bowie fan than I ever was.

I watched your recent live stream with Cosmo Sheldrake, which was excellent. Can we expect new Johnny Flynn material in 2021?

I’m near the end of recording a new album, it’s a collaboration with a friend of mine called Robert McFarlane. He’s a writer. We’ve been writing together this year, and recording when we can. That’s going to happen. And then we’ve got a score together – which includes some new ones from me – and that’s going to be a record. And then I’m hoping to start work on a new album as well, too. So there’s loads of stuff planned!

Well, you did say you enjoy having lots of projects overlapping at the same time!

I did! And sometimes to my downfall. I get excited about things and I can’t help myself… but it’s good to be busy.